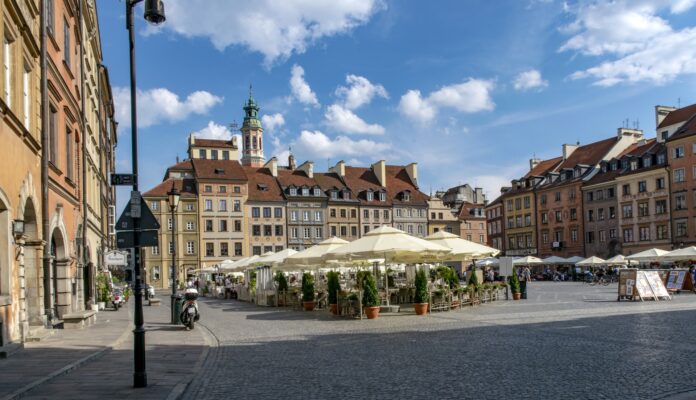 One of Warsaw’s most visited places. The market square was founded at the end of the 13th century and it was Warsaw’s largest square where parties and markets were held. As the square looks today is as it would have looked in the 17th and 18th centuries.

In the square you can see the statue of the Warsaw Mermaid (Pomnik Warszawskiej Syrenki) which also appears in Warsaw’s city coat of arms. According to legend, a mermaid was resting on the river bank near the old town when local fishermen heard her singing and fell in love with the fabulous creature. When a rich merchant caught and imprisoned the mermaid, a young fisherman heard her cries for help and released her. As a thank you, she promised to give all fishermen help if needed. Since then, the mermaid, armed with a sword and a shield, has been ready to protect the city and its inhabitants.

The site also houses the Warsaw Historical Museum. The museum is housed in buildings that were reconstructed after World War II. the exhibition presents the history of the city from the beginning of its history to modern times.

The Barbican and the defensive wall are the remains of Warsaw’s defensive walls, built in 1548, here is an exhibition that uses models to tell about Warsaw’s fortifications.

The small rebel monument (Pomnik Małego Powstańca) is a famous sculpture of a boy wearing a soldier’s helmet that is too big for his head. The monument is in honor and remembrance of the brave children who fought against the Nazis during the Warsaw Uprising.